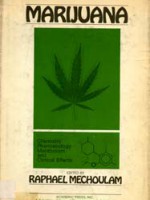 This volume presents a complete and up-to-date review of the chemical and pharmacological aspects of Cannabis sativa an dits preparations, hashis, marijuana, and the cannabinoids. It begins with a comprehensive introduction to cannabinoid chemistry that discusses the isolation, structural elucidation, synthesis, and reactions of all known cannabinoids. It then discusses structure-activity relationships in the cannabinoids series  incorporating information previously scattered throughout the literature as well as new data on these relationships.

Chapter 5 and 6 deal with the effects of cannabinoids on men and animals, including the bioassay of cannabinoid activity, behavorial and experimental psychology, neurological effects, endocrine actions, general pharmacology, toxicity, teratogenicity and tolerance.

The final chapter discusses the clinical effects of the action of cannabis.