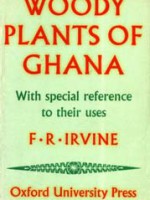 This work is a revision of the author’s « Plants of the Gold Coast », published in 1930.

The author has concentrated upon the woody species, i.e. trees, shrubs and woody climbers, which are the most numerous as well as the most important of the local flora. An attempt has been made to quote all Ghanaian specimens in theherbaria at Kew, Oxford and the British Museum. Specimns from areas on either side of Ghana have been included but with a less detailed treatment.

Because of the great proress in botanical research during the last twenty-five years, many species are included which were not mentioned in the earlier work. The botanical descriptions are now fuller, and include brief details of habitat and distribution. Special attention has been given to the economic uses of plants, including local medicinal uses ; and two appendixes giving the analyses of certain food and fodder plants, have been added.

The vernacular indexes have been greatly enlarged and news items which have been added are the bibliography, the glossaries of botanical and pharmacological terms and the scientific